In his 1963 “I Have a Dream” speech, Martin Luther King Jr. describes the feeling slaves must have shared after the signing of the Emancipation Proclamation as “a joyous daybreak to end the long night of their captivity.” Unfortunately, as we know, ending slavery did not end the struggles African Americans endured to become acknowledged, treated, and respected like the citizens they had become.

Despite these struggles, African Americans have excelled in every facet of society, including the medical field. To celebrate some of the historic, joyous moments that broke through the clouds of adversity, we’ll be sharing an African American medical achievement each working day of this year’s Black History Month. Follow us on your preferred social media channel (Twitter, LinkedIn, Facebook) to see who made the list. 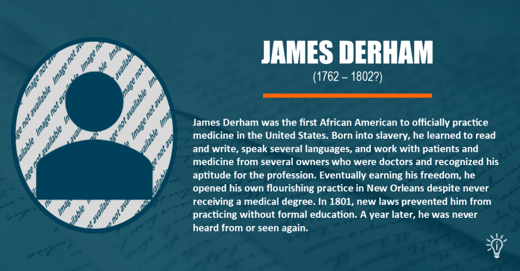 James Derham (also spelled Durham) is the earliest known African American to practice medicine in an official capacity in the United States.

Although born a slave, several of his owners acknowledged his intelligence and taught him to read and write, speak English, French, and Spanish, and even how to work with medicine and patients.

There are conflicting accounts as to how he earned his freedom (either through paying for it by working as a nurse or being released by his slave owner), but with his freedom he opened his own medical practice in New Orleans despite never receiving a medical degree. His language skills and knowledge helped his practice flourish among the freemen there, especially since blacks were not allowed to consult with white doctors at the time.

In 1801, new laws prevented him from practicing without a medical degree, so he had to close his practice. A year later, he was never heard from or seen again.

If you’re looking to do your own research into African American medical achievements throughout history, these are great starting sources (which helped guide our own research). Check them out and see who else made a positive impact on the medical community:

Impresiv Health is a healthcare consulting partner that specializes in clinical, operations management, and software consulting services. Your success matters, and we know it. That’s Impresiv.